Almost in the forest!

Yesterday, I added the last village sequence before the hero can leave the village, so for those who were starving to fight monsters, there is not that long left to wait. :)

Good news, you'll even be able to get a sword, and a team mate!! 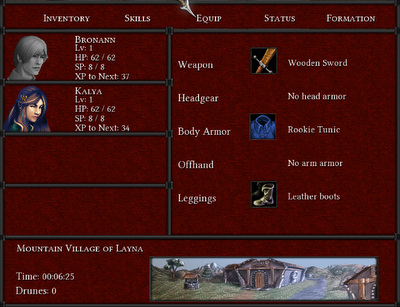 As for the other news, I've done a invisible but necessary engine change: Now, animations scripts (used to load every animated objects (or not, btw) you can see) have gained a much more flexible format permitting me, for instance, to directly load certain objects from the tilesets (thus, reducing the memory used), and to use any frame, an arbitrary amount of time, in an arbitrary order. (Compared to the fact that I previously needed to create an image with the frames in the right order.)

There is nothing much (new) to see as for now, since I adapted the existing animations to just look like before, but it will soon permit me to make the map sprite loading code much more flexible and add a true custom animation support for our heroes, making them laugh, being surprised in a more visible way. ;)

I'll also take the time here to talk about a issue the map code has been having for a long time:
Which is described here if any OpenGL specialist wants to have a look: https://github.com/Bertram25/ValyriaTear/issues/2
The map code is having a pixel shift on tiles that are on the bottom-half of the screen, making certain tiles not look completely "right".
According to the clues I have gathered so far, it seems that the texture and/or vertices coordinates computation is wrong somehow, so I take the opportunity to ask for help if anybody is interested in fixing that low point.

Best regards!
Posted by Bertram at 12:50 AM No comments:

It's been a while since I didn't write something here. A lot has happen though, even if quite some of it is still behind the scene.
Most of the people compiling the game will already have noticed it for days, but the end of the hide and seek quest has been scripted.
A special Don't-Desperate point to Iwan and Shirish who have been chasing that funny kid all around the starting village. It seems I'll need to add some hints there and there from the other inhabitants.

You should anyway be able to obtain the item needed to finish that small first quest.

You might also notice that, now, the map music doesn't interrupt when switching from a map to another with the same background music. To achieve this, I added an ownership system to the audio files, letting the game modes own a music file and free it from memory when not needed anymore, but keeping it untouched as long as a game mode needs it.

This permitted me to remove the sound loading and freeing micromanagement done in the map files, and will let the scripts do more stuff sound wise without cluttering the memory more than necessary.

Another thing that you might have noticed in the last post is that Safir-Kreuz did a first version of the new Bronann's portrait (a big thanks to him!), and I also removed the weapon from the Bronann's back, which will fit more the story beginning. The actual plan is to make the sword appear on his back based on his equipment. :)

I also spent some time on upgrading the treasure system and the key item handling, which needed a bit more love than I expected. You'll then be able to open treasure chest again :)

A small warning in the menu's item description should also tell you when an item is a key item or a shard.

I'll add much more treasure chests around in the village, but only once I've finished the game up to the point where you can enter the forest. More to come about it, then. ;)

So what about now:
I'm currently fighting a nasty bug in the event handling making random crashes appear for a certain set of events. The bad news is that it is preventing me to push the next part of the story, the good news is that I've found the bug and most interestingly why it is happening. I shall then fix it quite soon, hopefully.

Posted by Bertram at 1:00 AM No comments:

I've been quite busy on refining the starting plot lately with Lilou (The second story maker), and we finally agreed on the episode I full story. (Which is quite something, already).
I then started to script the first minutes of the game (and scripting can take time also!).
Like everything, a lot of work is still waiting but the engine state has proven once more that path finding problems are gone, making it possible to make use of it extensively.

Along with this, I finished and added a first version of the shop map and Kalya's house exterior, and wired them with the rest of the game. The village exterior is now considered complete, even if it is still full of small map tiling bugs I'll try to correct little by little.

I also upgraded the Allacrost branch to make its demo playable with the latest engine version.

Note that things might sound silent code-wise, but I've got my bag of unreleased (and unreleasable) stuff I wish to finish by the next weeks. ;)

Last but not least, here is a little surprise preview:
'Till next time!
Posted by Bertram at 12:44 AM 5 comments:


Since the last time, I spent some time at adding several maps and some other elements to expand the starting village exterior. And if I'm counting right, there is only one exterior map left to cover the village part. (which I'm currently doing (and re-doing) atm.

I also finally finished merging the script support from the boot and the battle mode into a script supervisor, which will permit me to add custom (scening and dialogue mostly) scripting for any game mode. :)

Last but not least, I couldn't resist anymore and I reached a first step in a long time wish:
In the battle mode, the characters now have custom scriptable attack support, and use of it!, which means the hero will now jump to its enemy before hitting it with his sword.
I also fixed the battle actors drawing order so that the enemies behind one another aren't overlapped anymore, and the characters going to face their enemy don't walk over the ones below, for instance.
You might also notice that I started working on Kalya (Laila) attack sprites and several other little additions.

'Till next time.
Posted by Bertram at 3:20 AM No comments: