News from the project! (Yes, you read well!)

It's been quite some time and quite some changes in real life. But I do apologize for the lack of news mostly due from me being very, very busy. ;) What happened since last time? A lot of technical fixes happened, when I was active or helped by authenticate, endoalir, bmorel or SuiteCake. (Thanks guys!) - Project reorganization: I turned Valyria Tear github into an organization. I also turned luabind into a submodule based on the quite good luabind fork by Oberon, and adapted it for c++11. (Still need to work on that part to make it accepted on upstream.) I also moved the editor in its own repository which permitted some more simplification. - A big leak killed! The most noticeable change is that I killed a few days ago a very nasty bug that was there from the beginning, making the lua threads never freed from memory. This means the game won't end up anymore swallowing gigs of memory for nothing and crash due to some memory overflow. - And other niceties! Moved to C++11 officially!
Battle animation fixes to scripts, ...
Simplified battle computation functions.
Auto-battle implementation with the help of SuiteCake
Added a menu to call any kind debug scripts
Fixed background image resizing by authenticate.
Removed the need to write texture to disk when resizing the context by authenticate. And a lot more of bugfixes by everyone! What's next? The ultimate plan is to work on the few features still lacking to make the game more interesting in term of strategy and nicer to players.
Then, a full game rebalancing will be done based on everyone advices.
There is still quite some work to do but we're getting there! Stay tuned!
Posted by Bertram at 4:19 PM 6 comments:

Hey there, :D Just a few words to thanks loudly Eugene Loza for creating a let's play for Valyria Tear! The let's play now spans till the beginning of the Mt Elbrus Dungeon and is still being worked on. :)

So, what happened on Valyria Tear since the last time?

Valyria Tear technical upgrade is still being worked on, but several interesting issues were fixed and a few features done in any case. :) The most interesting ones are:

- Added a setting to either be gentle with the CPU or get the maximum FPS possible. You'll find that in the Video settings.
- Added support to disconnect and reconnect your game pad without being forced to restart the game. Thanks to SuiteCake for that one. :D
- Completely reorganized the game data. When I say completely, believe me it's completely. This was hard work, but now the data is organized with next episodes and features in mind.
- Made the app name and logo optionally translatable. Gallaecio requested that one a long time ago, and I'm glad this is now done. :)

- Added support to see active status effects on the current target, so that you can see what enemy is affected by them, or which ally you should help, for instance.

- Added support to show the status effects potentially applied when aiming on a body part. Useful against certain enemies. 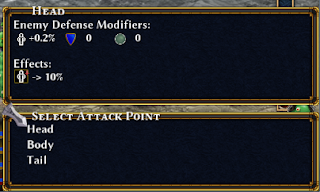 - Also, as I was on it, now both battle heroes and enemies have much more common logic, permitting for both of them to support an optional AI with script support, and custom death, skill and item scripted animations.

Next OpenDungeons release nearing completion! If you are a Dungeon Keeper fan, just have a look at the new website, and try the latest development snapshot. :D Stay tuned!!
Posted by Bertram at 7:41 AM 3 comments:

Hey there, :) Socapex just made me a great surprise by creating the OSX package for the full Episode I version. Just go grab it on the Downloads section! ;) Stay tuned!
Posted by Bertram at 7:47 AM 1 comment:

Just some news from the Episode 1.1 technical refinement release.

First of all, I've finished migrating and fixing the current game scripts following the new scripting API.
Thanks a lot to authenticate and SuiteCake for providing code cleanups and feed-back along the way. \O/

authenticate also fixed the minimap rendering with intel drivers and I owe him a beer for that.

I've also streamlined a bit the map code to follow the standard coordinate system used by the rest of the engine, in preparation for future different zoom ratio support. ;)

I'll be at reorganizing the game data now that I have enough of it to be sure of how I do it. ;)
And then, I'll have a go at porting the HoA features from the map editor so that starting to work on the new 1.1 content will be much easier.