Final release of Half-Episode I

The first Valyria Tear release of half the episode I has reached its final state!
Note: The windows installer and the Linux source package should be available in a few hours. The packages are ready!! Enjoy!

And here is what has been done since the last release candidate (aka RC2):

First of, the game is using new musics in battles and in the caves area, permitting to give back to Allacrost by letting it breath with its own musical mood. I hope you'll enjoy the new music as I did play with the new ones for several days to make sure of the replacement.
A big and never-ending thanks to OpenGameArt.org as the many quality and free contributions there made this step rather easy, for that change, but also for everything linked to open sourced art in general.

I'm also taking the opportunity to thank again the quality while fast-paced work of IkarusDowned, who simply finished the quest log, which is looking quite useable now:

He also worked on the beginning of a map (and minimap!) support in game, and the world map is already a very usable feature, see for yourself:

Let's not forget the work of Codergreen who actually reached a milestone in the refresh of the shop mode. The new shop is now much simpler to use and quicker to get stuff from or sell to, and I thank him warmly for that.
Simply select the item you want to buy/sell, use the left or right key to add/remove, confirm and you're done.
Trade support is also on the roll and should be ready for the next release!
The new code should also be lighter, both in readability and in performance, as it seemingly was for me:

As for the misc things, many, many smaller things have made their way through and were added or fixed for this latest release, I'm taking the opportunity to thanks Shirish (among many others) for the thorough playtests he's done and the bugs reported:
- Many optimizations, removal of global variables, in lua scripts.
- Made the engine able to drop a global table before reinserting data in it, thus preventing the read of outdated data and preventing potential crashes and the loading of invalid save data.
- Addition of missing dialogues where the players consensus found relevant.
- Refactor and cleanup in the settings code, also adding the missing joystick keys, removing unused ones in the options:


I also thank NaN and BioHazard for their feedback and their continuous translation updates.
And finally Roots, for his will to keep collaborating with us, while struggling to bring Allacrost in a more and more interesting and enjoyable state. :) You might soon have the possibility to play two RPGs instead of one!

Now that this episode part is done and in feature freeze, the next version of Valyria Tear will feature what's next in the story, along with many new features!

Stay tuned!
Posted by Bertram at 5:52 AM No comments:

After a lot of work, the release candidate 2 of our first release is here and can be downloaded here.

This time, I provided both a windows installer, and a linux source package, fully tested against official packaging rules thanks the marvelous help of Ablu. :)

What changed since the previous pre-release?

In short:
- Addition of the actual introduction of the game.
- Quest log in the menu thanks to IkarusDowned.
- New reorganized battle command menu.
- Many new graphics and small updates in the maps.
- Translation of the all dialogues and the main GUI options in every available languages (German, Italian, English and French) thanks to the help of BioHazardX and NaN.
- Simplified and more interactive first battle tutorial dialogue.
- Made the linux source installable and thus packageable.
- Many, many other bug fixes.

We also tried to answer all the feedback received on the forums and by other means and tweaked many things based on that, even if certain are still pending.

Also, a Mac port requested!! If you're a mac developer, and willing to help on that part, I couldn't be more happy, feel free to get in touch. :)

Stay tuned!
Posted by Bertram at 2:16 PM No comments:

Just saw a video of Valyria Tear in the RPG category of FOSSGamers:
https://www.youtube.com/user/FOSSGamers

Here it is (The video was made by ChemBroTronNo1):

And here are some news from what happened since the end of December :)

Making the Christmas release has been quite a ride, both very entertaining, and taking a lot of energy, and I've been quite happy to take a back seat for a few days and enjoy spending time with my family and also enjoy other's work done on Valyria as well. ;)

A lot of new activity has also happened during the second of those few days, as some of you already reacted on the forums, by mails, or by opening issues, and I wanted to say that even if I say, 'err, no!' to your feature request or your crazy ideas, I do appreciate you both took the time to try the game, and took the time to take your virtual paper and pen to write back your impressions.

But enough speech, let's look at what happened thanks to the work and feedback of what on can now call the 'Valyria Tear Team'!

Let's first start with Roots, who actually did all the balancing work made on items, and enemies, along with working on improving the loading of the characters stats handling code. (already present in the Christmas release). I couldn't talk about that earlier being short of time, but I still wanted to point that out.


As for the menu mode, IkarusDowned did a lot of master work on it, rewriting all the way the sub-menus are loaded and handled to be more readable and maintainable, and adding support to be able to quick-equip an item from the inventory. 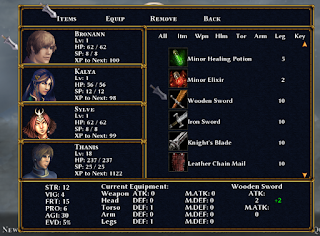 Not only that, but he also added the first working version of a Quest Log! Work is still being done on it, but it's already nice looking, and merged the Formation and Status menu into one.

Codergreen isn't resting as he's steadily working toward a simplified shop mode, which is almost working so far. More to come on this!

As for me, if you've tried the X-Mas release and finished it, you'll know what happened at the end. And I've reused a part of it to add the actual introduction of the game.

While keeping polishing the Half-Episode I content, I've also been trying to answer the call of reports made both on the forums and in issues by adding hints gently provided by qubodup on the first hide'n'seek "quest", updating translations also gently provided by NaN (German), and BioHazardX (Italian).


I also fixed the fade out not done when quick changing maps, turned the music fade out/in into states making them correctly handled when restoring the music state in-game, and several other adjustments like the addition of a key quick-help at game start that some will appreciate: 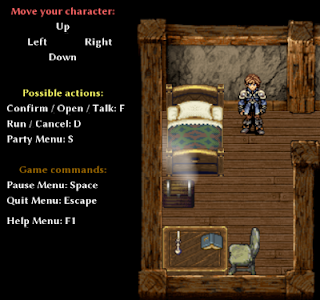 Last but not least, I've simplified the first battle tutorial dialogue to make it more readable and not entering the details too much, especially for characters that have only one skill, and players that might be completely new, and added a nice 'look here!' hand cursor animation. ;) 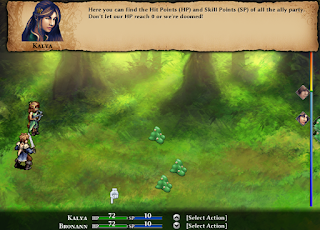 A new actual release candidate is planned to be out in a few days from now, so I hope you'll enjoy the new features and bug fixes done on it compared to the 2012 release.

Regards,
Posted by Bertram at 2:00 AM No comments: