Au menu this time, quite some things happened since the last piece of new, I even had the occasion to take a break and have some vacations. ;)

Code-wise, a lot of work has happened around status effects and their appliance in battles:
Elemental, and status effects are now loaded and shown correctly in the shop mode. While on it, I also made shops actually support different price levels, so that the buy and sell pricing can vary according to your friendship with the seller. 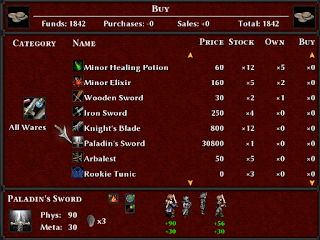 In battles, a lot of work was made to show properly status effects and make them apply and last correctly.
For instance, you can now visually see it better when several active status effects are triggered, and the effects will take the battle time factor in account and correct their duration during fading out times, making them a bit more fair and more realistic, at least in my own eyes. ;)
(I also added a fully functional stun/paralysis effect. :])

Another addition that won't go unnoticed ;), is battle particle effects support.
Let me explain, particle effects were already supported in all the game modes, but I had to make the particle effects be rendered at the right time so that it does overlap any sprite behind it, but doesn't overlap any other sprite in front of it.
The nice fact about this is that I was able to add support for the very first spells with visuals: Fire burst, First aid, and soon Haste, and Wave. ;)
I also rewrote the basic battle AI so that it can choose between all the currently supported types of skill, and not only the basic point based attack ones. This permitted to give them defensive, support and offensive skills and spells support also ;)

Another nice thing I wanted to do since some time now, is the addition of missing battle animations for Bronann and Kalya. I also made them whisper their spell at warm up time, and have a custom spell/support skill cast animation. I also added the quite missing Kalya victory pose :] 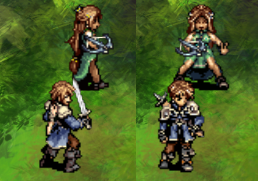 Last but not least, quite the best for the end in fact, thanks to the magnificent work of Zabin (from Open Game Art), a lot of improvement went into the mountain, winter and forest tilesets, permitting also to link better the mountain and the forest together. :)
All those nice additions shall be used quite extensively and shortly.

Qubodup made a nice video showing the latest progress made: Live!

In the middle of the woods...

A lot of time has flown since the last update and here is what has been done since then:

A lot of work has been done to the forest area and related features, and the forest has been enlarged by two new maps, tree variations to make it more colourful, and a new event (Beware of that one!).


The map monsters will be also a bit smarter as they will now try to catch your character even out of their wandering area, as long as they can see you.

As for battles, the forest has gained a new shiny battle background thanks to Tamara Ramsay (vectorgurl.com), and a lot of work has been done in improving the battle logic, with the addition of three battle types (wait, semi-active and active ones) making the enemy wait for you to execute actions for your characters... or not. ;)
I also started to work on the very first boss sprite... (Please don't laugh, it's a draft ;]).

More likely now because of this particular monster, I worked on battle character defeats and the battles can now also be lost without forcing you to restart the whole game...

I also took time to work on updating/upgrading the font used within the whole game to make them a bit more readable, for instance:

Now as for the invisible coding part, some profiling was done on the code, and I personally made optimizations in the OpenGL draw calls and in the font cache iterations to gain ~20% fps at draw time (according to the two computers I tried so far.)
A warm thanks to 4144 (author of Manaplus) for that.

I would like also to thank Jetrel (Frogatto & friends) for the nice work done on the desert tileset :), Shirish for all the testing and reports, and Nemesis for his willingness in joining the development effort.

Posted by Bertram at 8:24 AM No comments: