Here is what happened last month in Valyria Tear :

Story:
- The main effort is currently being made on adding the final part of this Episode I. The dungeon 1st floor is completely scripted, polished, ..., and 2nd floor is done by a quarter.
This puts the dungeon part to be done at, roughly speaking, 60%

Monsters have been balanced also, even if still missing certain special attacks ;), and a lot of tweaking has been done to make it more lively.
New items have also been added to bring more variety, especially now that status effects are more fully supported.

Among other items, the 'Escape Smoke' will please the ones who wanted to flee from battles, for instance. ;)

- Translations
dimproject made a Russian translation update. :) And I've almost covered the french part about the latest additions.

Among a lot of misc bugfixes, and at very first, game options support has been added in the pause menu. I thank bmorel and SuiteCake for giving me the little nudge of motivation to make this happen. :) 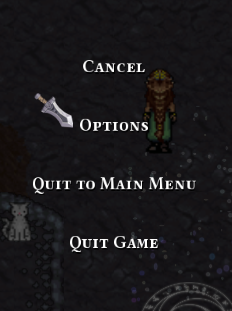 This now means you will be able to change the language, the sound levels, and the video resolution, for instance, without quitting your current game. :)

This has still one limitation though, as the language change in dialogues will happen only after moving from the current map to another. The other texts should be translated right away, though.

He also fixed warnings seen when compiling using clang and a bug in the procedural minimap creation code.

SuiteCake also helped by fixing some input mismanagement when using a joypad. This fixes certain lacks of updates when navigating in the menu mode.

I also fixed for good the glitch sometimes seen on Bronann animation when winning (making him idle while he should run.)

Now that the very first trade offers have been added in game, this permitted me to check more thoroughly the trade conditions code and fix it.

Support to trigger an event when encountering an enemy has also been added. ;)

Posted by Bertram at 2:08 AM No comments: