First of all, I took care of a long time wish, check whether the allacrost demo could work with the newest engine version. It's now done! The HeroOfAllacrost branch is now up-to-date again. You can try the former game demo by compiling this branch now. :)

It was quite a good proof of concept to make someone else's work function with the scripting language changes I've put. And I'm a bit reassured about the current engine state now. ;)
It also permitted me to fix two bugs related to invalid halo images and context inheritances.

I also kept on working on the editor to further easing the pain of map making. There is still work to do, but you can now create layers, and move them up or down as long as they stay contiguous by type. E.g.: A ground layer cannot be displayed after a sky one.
You can also hide/show a layer; the editor will hint you about what layer is visible or not using an eye icon left to its name.

What is left to do is to add the possibility to remove a layer, and to change its type or name.

With all that, I should have a basic yet sufficient base to keep mapping a bit, and look at what tool could help me next.

I also thank qubodup for pushing to add support to boost 1.49. I guess he gave the right little nudge at the right time, as it now done. :)

Till next time!
Posted by Bertram at 4:14 AM No comments:

Lately, I've been busy at putting in shape tilesets and other sprites for what will be next in game.

A new npc character has made her entering (by finishing some of Jetrel's work), and I made several adapted to be tileable additions from the Circle 2D free graphics from lostgarden.com


I also added a draft of a new map (which is veeery ugly atm.) and I must say that I'll tend adding several (even unfinished) maps simply to be able to test the scripts and what's next in the story before entering the polishing phase.

While on it, I came back on working on the editor which is still in need of a lot of love. For now, I simply removed the texture smoothing there (wasn't helping when looking at tiles transitions.), and ported it to QT4.

I'm happy to say that the outline of magnified (enlarged) sprites is now fixed. As that one took much more time to fix that I thought (since I've been on this point since several weeks now.), I'm quite happy to say that those white artefacts are now an old story.
For some odd reason, I wrongly thought it came from the coordinate system used for the map mode, and I've trying workarounds and fixes in that area for some time already, without realizing that the smoothing method (GL_LINEAR) was simply using the RGB values of the nearest transparent pixels, leading to those white and grey edges on sprites borders. Here is the result: 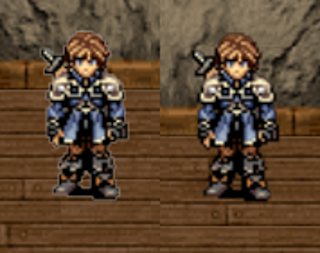 If you look carefully, you'll notice the white outline on the left, black on the right.

Might sound simple for some OpenGL experts out there, but I'm pretty glad to see this fixed.

My computer broke two weeks ago and it was kind of painful to put it all back in shape before starting development again. Fortunately, I didn't lose any data regarding Valyria or not, thanks git and thanks backups. :)

So here are some news from all what happened since my last post:

- I added several new tilesets, and characters sprites set up out of mockups gently given by Jetrel.
You can see the mockups here if you're interested: http://www.http://wesnoth.org/jetrel/Allacrost/
I take the opportunity thanks him warmly for letting me use his work and keep on working on and with it.

To sum up, I gathered all the props in one tileset, added small ground variations for the harrvah, and the mountain landscape, and added the wood, snow, and desert house tilesets. (some of which still have WIP parts).

This will permit to finally add the first game "dungeon", but I'll come back at this part later.

- I also had a fair amount of work on the shop mode, which seemed to be in a not quite good shape after all.
A bit of word about it, if you allow me to:
When analysing the code, and the overall logic done throughout that mode, the main design drawback leading to crashes and display flawed logic was the fact that the deal types (weapons, items, ...) were computed against the items to buy, while those were also used for the items the player can sell.
All this was tricky to sort out, even on a higher level, as several piece of code were initialized once and set in stone, even when the items present there had changed.

To make it cleaner both in my little head and in the code readability, I had to separate the items to buy and to sell, their own deal types, and to make sure they would not be mixed again (as for the readability), I put the deal types in their respective interfaces, since there were only used there.

In the end, the shop is starting to look good, even in the memory management there needs some improvements. I don't know yet whether the text or some other memory management objects are in cause, but again I'll see that later.


Now that the main parts of the games are, if not fine for a bigger project, functional, my next priority will be to add more space to the three-maps sandbox the game is, atm, and why not reach the state where the first battles can be encountered! :)

Depending on my time and luck on it, I'll also have to review the map display code to finally sort out the bad tiles offsetting seen in the map mode (which was there from the beginning, as for me.), and see whether I can have a go at removing the white edges around the sprites, when the images are enlarged.
Fun to come indeed. ;) Would I fail on this task, I would then look at putting a map view making me out of these kind of problems. (The worse, the better sometimes, eh).