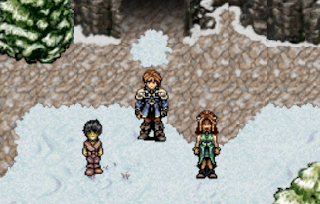 There has been quite some blood poured in it, and not only mine, far from that. ;) So what has been accomplished you've been bothering us with it more or less every month since two years now? Valyria Tear is a 2D J-RPG with an emphasize on the story and the music. See this as a love letter to the 2D RPGs people used to play in the 90s, when the developers didn't have all the graphical effects they wanted to, and focused more on the mood and the depths of the storyline and the music melodies to make their game appealing. Those were great times. Valyria Tear is a fork from Hero of Allacrost - with a now half-rewritten and improved engine - as this open-source project was more or less the codebase I was dreaming of, was open-source, and was, sad to say, more or less abandoned by his leader, Roots.
I thank him and all his team for starting the effort though, and I hope that maybe one day someone will come back and have a go at telling us the Allacrost story. Some says I've killed Hero of Allacrost by forking it, some says I've saved it. Time will tell but the code lives on and people can play the game. I would also take a line or two to thank everyone involved consciously or unconsciously in this project. To the people that helped me, implemented features, reviewed my sometimes stupid code tainted with coffee, suffered my comments, or simply played the game and reported bugs. Even if many features are still in the making, Valyria Tear offers a complete game experience, with fully working maps, menus and battles and all the things you can expect from a classic:
- ~50 maps done.
- 18 32x32 Tilesets used (on the 25 prepared for what's next.)
- 2 and half playable characters. ;)
- 19 different encounterable enemies.
- A dozen NPCs, skills, spells, and different items.
- Status effects can be applied on characters and foes.
- Full joystick support.
- The game is fully translated in 6 languages, and more are incoming.
- Three UI themes.
- Main and secondary quests, hidden treasures and traps. ;)
- All in all, something like 7-10 hours of gameplay.
- ~140'000 lines of c++ code and lua script.
- And a lot more things I've forgotten...
I've also reworked a bit the story beginning based on feed-back to make the game more enjoyable, for instance by making the Orlinn's hide'n'seek quest optional when talking to Kalya once he is hidden. This is nice and all but what's next? The Episode II will focus on the second part of the story of course, but also:
- Adding a better skill system based on equipment and on Experience points, if all goes well, to give the player more strategical choices.
- Improving and refactoring all the bits that needed it.
- Introduced new playable characters and a new map mode. ;)
- Add more visuals in battles most notably when using skills, attacks and spells.
- A migration to SDL2 in order to offer better resolution support, and other improvements.
A parallel effort has also been started with Akien and Nemesis to rework the game balancing and make it more interesting at the beginning. If we don't have too much trouble, we'll release that part as soon as it is ready so you can enjoy it. I hope you'll enjoy the game as much as I've enjoyed making it. 'till next time!! :)
Posted by Bertram at 1:31 PM